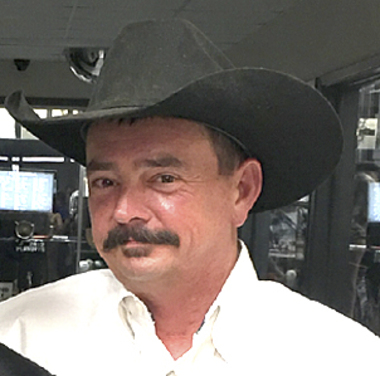 Back to Christopher's story

Christopher Michael Altum gained his heavenly wings Monday, November 18, 2019.
Visitation and Rosary is 6-8 p.m. Thursday, Nov. 21, at Baum-Carlock-Bumgardner Funeral Home. Funeral service is 10 a.m. Friday, November 22, at St. Francis Catholic Church with burial following at LuQueen Cemetery.
He was a longtime resident of Possum Kingdom Lake, and a 1992 graduate of Graford ISD. Chris was lucky enough work at a job that he loved, welding. He had no hobbies, only passions, his family, "no luck" fishing, team roping and ranching.
Chris will be gravely missed by his son, Dalton; his parents, Danny and Sandra Altum; brother, Sammy and his wife, Gina; brother, Joe; brother, Jon; brother, Patrick and his wife, Janlyn; two nieces and five nephews, all residents of Graford; countless uncles and aunts, and friends too numerous to list.
He was preceded in death by his Uncle Harold and Aunt Audra Altum; grandparents, Robert and Juneann Hinkson; and grandparents, Bob and Zella Altum.
Baum-Carlock-Bumgardner Funeral Home
Published on November 19, 2019
To plant a tree in memory of Christopher Michael Altum, please visit Tribute Store.

Plant a tree in memory
of Christopher

A place to share condolences and memories.
The guestbook expires on February 17, 2020.

Ron Bulman
This news saddens me greatly. I was not close to Chris or knew him long. Worked with him a couple of years at Perry Eq. about 16-17 years ago. Went to a cookout on the 4th of July at his house one year, met a few of the family, watched the fireworks at Hells Gate. He gave me a ride to work from 16 & 180 a couple of times when my truck was broke down. Lost track of him after I was laid off. He pestered me mercilessly, always needlin about somethin. We jousted with barbs, never a hard feelin I remember. RIP Chris, may your family and other friends be blessed with peace from the Lord. Ron.
Bubba Whitley
Chris was a awesome man and one heck of a friend/brother. He will be truly missed by many. I love you Hand! Fly high bro!
Cemi Parkey

Basket of Joy was purchased for the family of Christopher Michael Altum by Cemi Parkey.  Send flowers

May God give you peace which is beyond all earthly powers! I am deeply sorry for your loss.

Bealina Vincent
Had a great time in grade school at Graford ISD! Chris was one of a kind! My condolences go out to all Of his family! Lots of loving thoughts & prayers!
Marcella Price
I am so very sorry for your loss my love and prayers are with you all
Walter Hoesing
Chris was a good man. He was hard working. He was very much of an asset to the company. Always, always a pleasure to work with. He is sorely missed to say the least. Thank you for sharing Chris with us and God bless you all.
Kasey Hoesing

Lovely One Spathiphyllum Plant was purchased for the family of Christopher Michael Altum by JIM Ward.  Send flowers

Scotty Whitsett
It was my pleasure to have know Chris for 20+ years. I regret having lost contact with him over the past few years. He was a natural when it came to welding. Chris was one of a kind, and will be missed by all. Condolences to his family.
View all