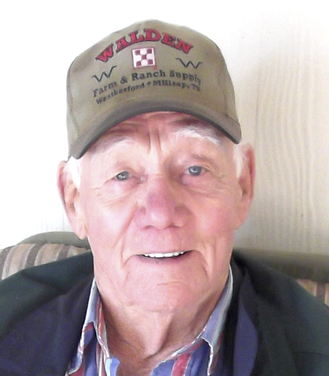 Back to Garvin's story

PALO PINTO - Garvin Beedy, 89, went home to be with the Lord Wednesday, October 23, 2019 at his home.
As per Garvin's wishes, he will be cremated and a Memorial Service celebrating his life will be held Saturday, October 26, at 10 a.m. at Lone Camp Baptist Church in the Lone Camp community.
Garvin was born April 19, 1930, in Cochran County, Texas, to George Crane and Flossie Martin Beedy. He married Katie Joan Stark on October 3, 1985, in Uvalde, Texas, and in 1994 they moved from Floydada to Lake Palo Pinto. He was raised at South Plains, Texas, and graduated from Floydada High School. He was a proud Eagle Scout, and had been the past president of the Golden Spread Charlet Association. He farmed for 20 years and was a seed salesman until 2005. He enjoyed fishing, hunting, building things for his wife, and enjoyed his kids, grandchildren, and great-grandchildren; he always said they all made his life better.
He is survived by his loving wife, Joan Beedy, of the home; children, Larry Beedy (Gayle), Resa Trout (David), Tonya Mahagan (Ronnie), Mitzi Carney, Monty Jones (Bente), Lance Jones (Audrey), Shawn Jones, Kati Childress (Brad), and Marci Graham (David). He is also survived by his many grandchildren and great-grandchildren that he loved spending time with; and his faithful companion, his dog, Gus.
For those wishing to honor the life of Garvin, a memorial contribution can be made to the Cal Farley's Boys Ranch, 600 S.W. 11th Ave., Amarillo, TX 79101.
Online condolences can be made at www.edwards-funeral-homes.com.
Edwards Funeral Home
Published on October 24, 2019
To plant a tree in memory of Garvin Beedy, please visit Tribute Store.

Plant a tree in memory
of Garvin

A place to share condolences and memories.
The guestbook expires on January 22, 2020.

Amazing Arboricola was purchased for the family of Garvin Beedy.  Send flowers